Is it just me, Or does the font for the donor award look like it got drunk or something?

Compare it to the developer award which has almost all of the letters.

Edit: It also doesn't have the gradient that all of the other awards have...
12

Grues would be an uncommon random spawn in any dark area, Be it underground, On the surface, Or in someone's basement.


Grues would have really high strength, Attack, And Defence levels, With a medium health level.

Grues would also have no nameplate, Making it difficult to spot one. To spot a Grue, Watch for their movement, And listen for their horrible gurgling sounds.

If you are killed by a Grue, The death message displayed would be "[player] was eaten by a Grue." And the only way to retrieve your inventory is to kill the Grue.

The easiest way to deal with the looming threat of the Grue is just to light up your areas. Grues are terrified of even the smallest amounts of light, So holding a torch or standing on gold will be enough to keep them at bay. If a Grue is caught in light for more than a few seconds, It will instantly combust and die.

If a Grue is killed in combat, It will drop a Grue Heart item. This item can be worn and gives massive combat buffs when the player is in total darkness, But deals immense damage to the wearer if they are in light. What this set of scripts features:

Guns with an ammo amount stored to the gun itself.
Guns that do more damage when headshotting an enemy.
Bullet particles that stop when they hit an enemy.
A better reloading system.

This script is currently balanced around the default 148 HP of a player without skills. It takes 5 body shots to kill and one headshot.


The way guns store ammo is via durability. Durability is better than history for storing ammo because it means each gun has a unique ammo count. If you kill a player and pick up their gun with this system, Their gun will have the same amount of ammo for you as it did for them when they died.

If you used a history system, You would have the same ammo counter for all guns of the same type.


Another unique thing about this system is that if you have less than the max ammo of the gun and you reload, It will give you a gun with less than 100% ammo capacity. Ex. 6/7

This means no matter how much ammo you have, You can still reload your weapon.

This also does more damage with headshots. Though the headshot radius is based off of the zombie's fat head, So it could be balanced better for PVP.

One last thing to note, This script may not work exactly as shown here on future PC versions, It takes advantage of a small bug to cut down on intersect conditionals in the shooting script.

Craig has said he has no idea what causes the bug, But it could possibly be fixed in the future.
14

Perdition is a deathmine that takes place in Hell.
I am sure most of you are aware of the deathmine world concept. I'm going to try to make it different enough for it to be somewhat enjoyable, But similar enough that people may actually play it.

The main "gameplay" of the map is mining rock to sacrifice to the lord of Hell, Nergal. In reward for your sacrifice, You gain Blood Points, Which can be sacrificed to obtain better gear, Potions, Etc.


Upon being killed by a player, You will lose 5% of your blood points, Which are then given to your killer.

For players not content with Deathmines gameplay, There is a side quest that can be played that may actually be somewhat fun.

These mobs can be killed for Blood Points and additional gear.
In addition to these, You may find Demons. Demons are tough mobs with advanced AI and magical attacks.

Upon killing a Demon, You can obtain its soul. Demon souls are sacrificed in exchange for demonic powers.

The plains of Hell are also entirely PVP enabled, Allowing you to test your equipment on other players, As well as mobs.

So, Yes. I am a hypocrite. I hate Deathmines, And yet here I am adding to the problem. But hey, I guess I am spending my time in Hell for it.

My reasoning behind making this map stems from the fact that my medieval map is unfeasible on 360.

I put so much work into that map that the fact that it won't work is kinda heart wrenching.

PWRBTTN said that I should be less ambitious, And I joked about the fact that that would make me a Deathmines host. So here we are.


I'm not doing this so that I can get Demis (Unlike some people...) I am doing this because in how many years I have played this game, I have never once hosted a playable map openly. I have tried, But that never worked out for me. With the 360 community on its last legs, The only shot I really have is a somewhat decent Deathmine to be honest.


It's the right balance of something people would want, And something that I can do quickly.
15


ID could accept a var, Which is where this gets actually useful.
We would also need to be able to retrieve the ID of a block via vars.

This would be useful for things like storing the player's entire inventory, Or a block structure to memory, Etc.
17


In some uses, This would just be a matter of convenience, In others, It would allow for entirely new conditions that wouldn't be possible otherwise.

"If
CanExecute [CaveIn [x,y,z]] [True]
Then
// No caveins active on the map, And the coordinates are valid.
// Determining whether or not a cavein is happening would normally require a conditional that doesn't exist."

"If
CanExecute [CopyBlock [x,y,z] [x,y,z]] [True]
Then
// Checks whether or not two blocks match each other exactly, Or of the coordinates are valid."


MC has this in the form of comparitors facing off of a command block, It effectively turns all commands into conditionals if you decide to use them that way, And I think it could be really useful to people who are more creative with scripts. 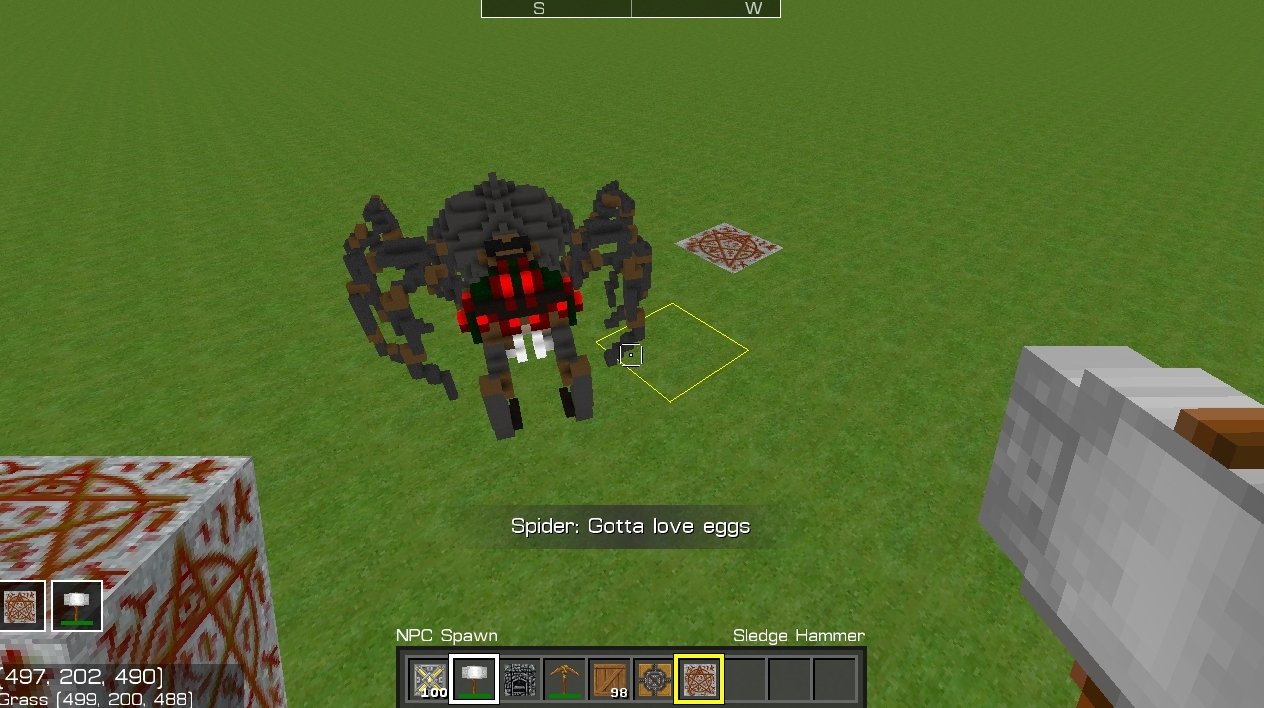 Is this the new default spider model?!

Did you burn the old not spider model?

Just a tip though, I think the spider's behaviour would need a change if this is the new default. Jumping spiders don't look like this. Then it loops after 1 second.

This script creates an analog clock on the positive Z face of the script block it is run from.

For anyone curious as to how this works, It first gets the current game time and separates it into the minutes and the hours.

Then it spawns particles along that vector.


It's not that complicated or hard, It just looks kinda intimidating.
20

Is there a way it could be made local to players?

It would be easier, except for split screen. But because of split screen it's harder, so will stay global, at least for 2.44.

The way I see it, PC won't have split screen, So all things that would have been difficult for split screen can now be added. Eg. This, Local wind modifiers, Etc.

This would be really great for many different mechanics. For example, Maybe it becomes easier to craft something the higher your crafting level, Or you could completely override the current strength mechanic and set the damage of the weapon to be based off of your strength level.

Ooooor, My favourite example. You can set a native language to a player and have all of the item names and descriptions be in that language.
Pages: 1 [2] 3 4 ... 48
Create a free account to remove all ad content.