« on: March 28, 2019, 09:25:10 PM »
I have already seen many people asking about this. So many people agree that the game should be open sourced to allow for the project to be continued by the fans. I don't know what more to add. But if there's no longer a drive to complete it, It'd be nice to give it to the community.
2

Total Miner Discussion / [Other] Reminiscence & A personal, Public thank you.

« on: March 28, 2019, 09:20:54 PM »
I first off just wanted to personally thank Craig, Not just for having created this game, But for being a great guy in general over the years I have known him. My life, And the lives of others have been changed in a permanent and positive way through this game. Through it I have both directly and indirectly been led to learn stuff I never would have otherwise. And I have been given friends stronger than any other.

The game may be ending now. But the impact it's had won't ever be forgotten. I think that's beautiful.


When I joined the forums almost 5 years ago, I honestly wasn't expecting much. But as of now I am one of the highest posters and I am just barely 3rd for topic posting. I got Robotic almost entirely due to forum posts, And it blew me away. I love this game. I love this community. If I had any regrets it'd be that I only ever hosted 2 maps publicly, And that one of them was a deathmine (albeit a fairly decent and well designed one.) However I joined so many maps, Saw so many amazing things, Had the time of my life. It's sad to see this game go, But I respect the man behind it. And my memories of it are enough for a lifetime.

Godspeed, Craig. I truly wish you the best for your future projects, And will support them just the same. 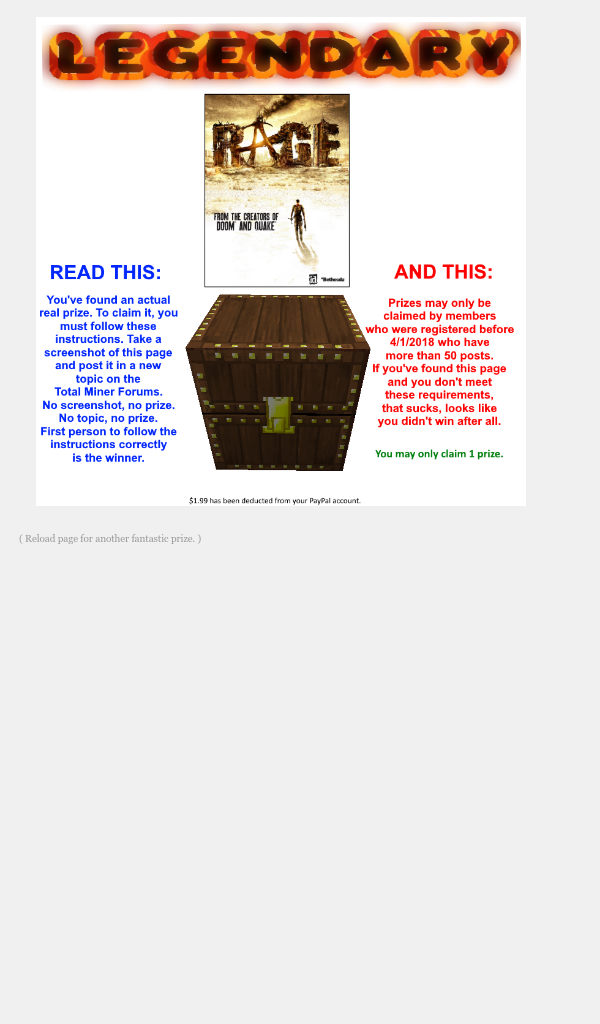 « on: January 07, 2018, 11:10:51 AM »
This is a fairly simple idea to give some depth to the game. I think that each fuel should burn at a different temperature. Fuel temperature would determine 2 things.
1: What percentage of the furnace time to use when smelting something. So a really hot fuel will melt gold a lot quicker than a cooler fuel.
2: Whether or not a certain fuel can actually melt something. So wood would not be able to melt Titanium.

This would add just a tiny bit of depth to crafting, And I think that bit of depth will improve things. Especially if it was made so that items with a furnace recipe could have a maximum fuel temperature for things like food. This way you can't just cook food with uranium, You'd have to cook it with wood or charcoal (Maybe add charcoal too?)

« on: December 23, 2017, 04:15:26 PM »
It's recently come to my attention that HUD elements are based off pixel measurements still. While this was not a problem on 360, With all the possible resolution scales from people's different monitor setups, It could become problematic on PC.

To amend this, I suggest [res:x,y] to variables to retrieve the resolution of the player's screen.

This allows people to position and size HUD elements based on normalized values.
6

Ideas / Jump Power to zones and whatever.

Before you go off saying "But Dryym, We have a gravity setting in zones", That is not the same thing. The gravity setting changes the gravitational acceleration of the player in the zone. Jump power would change the upwards velocity given to the player when they press the jump key.

Currently, The gravitational acceleration in TM is around 36m/s², With the jump power being around 9m/s.

If I change the gravity to be that of earth, My character will jump really high because the jump power is really high, But they will fall down at the same rate as a human on earth would.

Conversely, If I increase the gravity, I will fall faster and jump lower due to the jump power being lower relative to the acceleration.

With a jump power option, You can change how high the player jumps independently of how much they accelerate downwards.

Perhaps this could even be set to allow the double jump to have a different power setting than the initial jump.
7

« on: June 08, 2017, 04:18:02 PM »
This idea is simple on paper but will probably require a lot of back end work, However I would imagine that a lot of the changes to terrain generation required for this to happen will need to be done for infinite worlds anyway.


In simple terms, A biome would be a set of localized terrain generator settings that can spawn in the world.

Currently terrain generator settings can only be applied to the whole world. This means that it is impossible to have shallow hills and mountainous mountains at the same time.

With biome generator settings, You could make a mountainous biome which has steep terrain which is mostly stone, And you could also have hilly terrain with gradual rolling slopes.

The terrain settings menu would have to have a new option called "Add Biome" where you could choose to add a new biome to the generator.


In addition to this, There would be a new group of biome specific settings which are as follows.

Biome Min/Max Size: The minimum and maximum size of a biome in blocks.

Biome Min/Max X/Z: The minimum/maximum X/Z coordinate in which this biome will appear. Useful for making colder regions to the north and south of the world whilst making equatorial areas more temperate.

Biome Frequency: The likelihood of this biome appearing compared to any others.

Biome Neighbour Whitelist: These biomes must be neighbouring for this biome to spawn. Useful if you have a multiple part biome like medium mountains and tall mountains.

Biome Neighbour Blacklist: These biomes must not be neighbouring  for this biome to spawn. Useful for making sure deserts do not spawn directly next to snowy regions or anything similar.

Biome Ground Layer: Only available to creative worlds, Or limited to certain blocks for survival worlds. Determines the ground block for the biome.

Biome Ore Deposits: Only available for creative worlds. A group of settings that determine which blocks spawn in ore veins at what layers and how frequently.

This should be enough to allow for some complicated world creation whilst still being accessible.
8

I wish you both the best on the celebration of your Mon.


Wait... Oooooohhhhhhh. It's your birthday... That makes a lot more sense! I am not suggesting sprinting to increase our speed even further past that, That would be ridiculous. Instead I am suggesting that we reduce the default speed of the player and all mobs and make the current default speed be sprinting speed.

The reason for this is simple. Without a difference in speed, Chases in combat will get nowhere. If sprinting is added, Then this will allow defenders a chance to make a speedy getaway, And it will allow attackers a chance to close the gap. Assuming that sprinting has a limited timer, Chases will become more enjoyable because you will have to time your sprinting to either get away, Or close the gap.


Another side effect of this is that it gives you a limited chance to run away from mobs that are normally way faster than you. Eg. Werewolves and Trolls.


Combat in TM has potential with its unique weapons and armours, But the movement system totally kills that potential by making combat a jumping contest. This would be the first in many steps to fix that and make combat more interesting.
10

Ideas / A change to the Ice Ring

« on: May 13, 2017, 11:20:13 AM »
People have been complaining about the ice ring since 2.0, And since we are currently on the transitional state to the PC version, I think now is the best time to make a simple and fundamental change to it to make it more balanced.


The idea is that when wearing the ice ring, Upon a successful hit, The player is frozen as before, But in addition, Their defence stat is kicked up to max, Making them nearly impossible to hit. In fact, Hitting them would reduce the time that they are frozen for. They would also lose their ability to attack, And their health regeneration would be slowed dramatically. All of this is designed to simulate the player being actually frozen in a block of ice.

This turns the ice ring from an annoying offence item to a defence item. Say that you are losing a fight, You can put on the ice ring and freeze your opponent in place to give you a chance to run away and regenerate. You can already do exactly this, But with the defence boost to the person being frozen, As well as the fact that attacking them reduces the timer, It removes any and all offensive use for the ring.


The same can be applied to ice arrows (Oh, The ice ring shouldn't apply to arrows anymore either.) If you are an archer, You don't want a melee attacker getting close. So when they close the gap too much for your own comfort, You can switch to an ice arrow and run away.


Granted, This would still be slightly annoying if you are on the receiving end of it, But you will no longer have to deal with being completely helpless as someone whittles your health away with their wooden sword against your full titanium armour. Instead, You'll just need to accept that sometimes someone will freeze you and run away.
Pages: [1] 2 3 ... 48
Create a free account to remove all ad content.